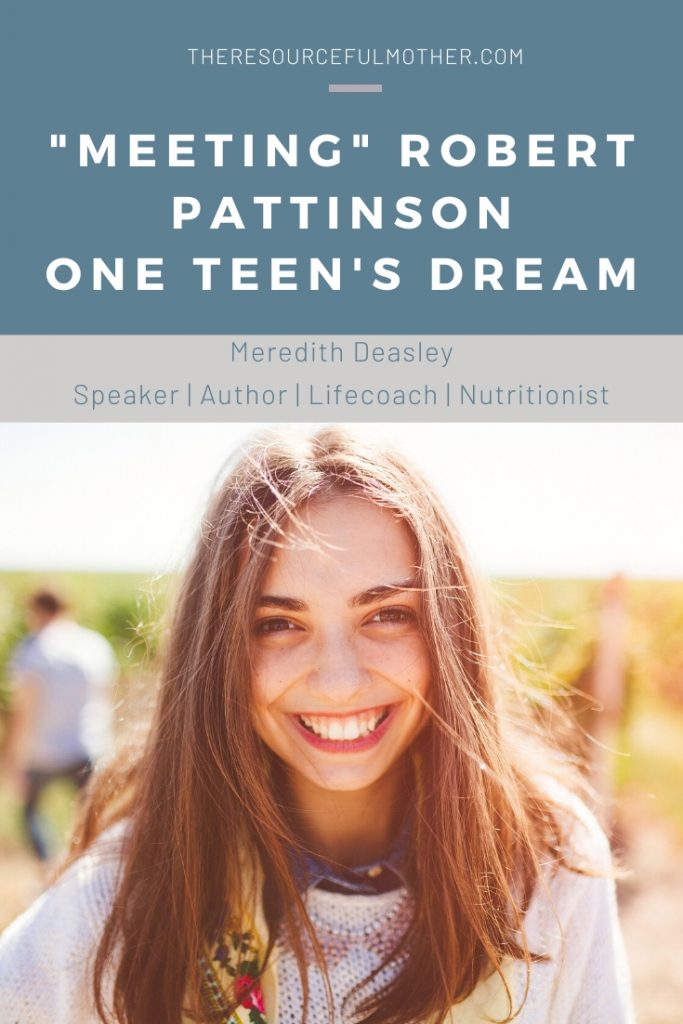 For most of my life, I didn’t feel as though anyone had my back.  I didn’t feel as though someone would do anything to help me realize my dreams. As a result, I have always ensured that my girls knew that I would drop anything for them and that they were clear that they were the most important priority in my life, while still setting the example that my needs were important too.

Ever since my eldest was 9 years old, she wanted to “meet” Robert Pattinson from the Twilight movies.  She has followed his career, watched his movies over and over and listened to every interview she could get her hands on.  No other movie star captivated her like Robert Pattinson.  Taylor is turning 13 years old this month….this marks 4 years of deep longing….

So, when Taylor googled why Robert Pattinson was not at the MTV awards this past Sunday (he had been in attendance the 3 past years, apparently!), she was shocked to learn that he was in Toronto for the premiere of his newest movie.  The premiere for Cosmopolis was at King and John and was starting in less than three hours – thank goodness for the Internet!  You would not be surprised to learn that within minutes, we were in our jeep heading downtown to The Bell Centre.

On the way, we had two people come down really hard on us for pursuing this pipe dream.  Taylor, knowing how slim her chances were of even seeing Robert, considered turning around.  I, on the other hand, had lived long enough to know that there was no harm in trying!

Forty five minutes later, we arrived in downtown Toronto, about an hour before Robert was due to appear.  We saw the lineup of people and joined it.  Posters for the movie were being distributed to everyone in line.  Many wanted Robert to sign theirs.  Taylor and I discussed the futility of having him sign ours; we wanted more.

I asked a female security guard, standing beside us, a number of questions to determine our options.  Before we knew it, we were heading inside the building where the movie premiere was going to be taking place, knowing we were supposed to head back outside.  Standing inside, beside the red carpet where Robert would walk, a security guard told us we had to move.  I saw a restaurant on the other side of the red carpet where people sat eating, oblivious to the mounting excitement around them.  I asked a lady if we could have her table when she was done eating.  Within minutes, we were seated at her table.  Then the restaurant area was blocked off and everyone who did not have a seat had to leave!  Taylor’s seat was about 3 feet from where Robert would walk through the door!

As we sat waiting, we watched more and more females vying for spots so that they could catch a glimpse of Robert, all of them being turned away by security.  I began to formulate a plan as to how Taylor was going to meet eyes with Robert.  I looked down at the table and saw that Taylor had brought an organic banana from home as her snack, as I had told her we might be waiting a while.  A visual flashed though my mind as to what she could do with that banana.  I outlined the plan to Taylor and was incredulous that she not only liked the plan but was onside!  We did some role-playing as we watched some of the actors from the movie walk the red carpet.

Then the loud screams ensued.  Robert had arrived. After he signed autographs for a few people, he entered the door beside us.  As if in a dream, I heard Taylor beside me, complying with our plan.  “Hey Robert!” her delightful, upbeat voice yelled.  He turned around with a big smile on his face, scanned the crowd and looked right into Taylor’s eyes, while continuing to walk.  I watched her smile take over her face, her eyes holding his, while she simultaneously lifted her banana to her ear, yelling in the same endearing tone “Call me!”  The restaurant erupted in laughter.  I looked at Taylor and saw the tears of joy in her eyes, as she stood in complete silence, peace permeating her body.  She had done it.  She had accomplished her dream.

I congratulated her and told her how amazed I was that she had the courage to carry out the plan.  She said “I would never have forgiven myself if I hadn’t made the most of this opportunity.”

On the way back to our home in the suburbs, we went over all the synchronicities that made it all happen.  Some of you may not understand the significance of June 4, 2012 to this young girl but for Taylor this was a night she will never forget.  Anything is possible as long as we BELIEVE and take the necessary steps.

Ironically, Taylor’s late grandmother, Shirley (Harris) Deasley is the one that spearheaded the push that brought Elvis to Toronto for his first concert at Maple Leaf Gardens on April 2, 1957.  At only 13 years of age, Shirley acquired over 2,000 signatures for a petition that got him to visit our city! Click here to see the pictures and information on the night.  Scroll down and you will see a picture of Taylor’s beautiful grandma, showing Elvis the petition with his arm wrapped around her.  Shirley spent almost an hour talking with him backstage that night!

Anything is possible.  Don’t let life slip by you.  We need to seize the day.  And for you parents , have your child’s back and let them know you have it.  One of your most important jobs is to help your child seize the day.  Carpe Diem!

I would love it if you would share your story as to how you helped your child realize one of their dreams.  Don’t forget to leave a link back to your own blog if you have one, via the commentluvfeature you will find here on the site.