How to Stop the Blame Game 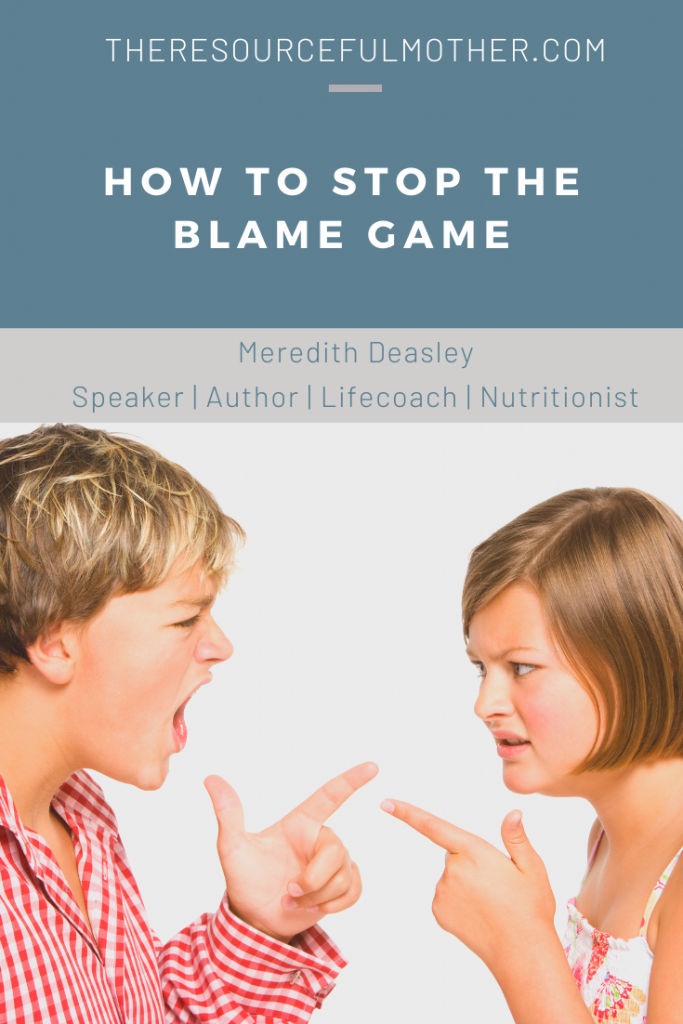 Every one of us has blamed others for our challenges. It’s a way of thinking that each of us is taught, as we go through life, and therefore, it has become a natural way for us to think.

Every time we blame another for our challenges, we give our power away.

And guess what? When we blame others, it simply means we don’t fully know the truth about them!

In order to learn how to stop the blame game, let’s go through a scenario:

A young woman in her early twenties came to me for help. She had been addicted to hard drugs for many years and was only smoking marijuana by the time she met with me. In her rehab program, she made the decision that she would never do hard drugs again because she realized how close to death she had come. But, the rehab program did NOT help her process the pain that led her to drugs!

I never asked this young woman what led her to drugs; that approach would have engaged her conscious mind, the part of the mind that blames. Instead, I asked questions, addressing her subconscious mind, in order to learn the TRUTH of what caused her deep pain.

I learned all about an incident where, as a child, she unintentionally caused major damage to her home. I accessed the incorrect beliefs she held, as a result of the incident. And I accessed her guilt and shame.

She felt she was unfairly punished as a young girl. Was she? That actually doesn’t matter. SHE believed she was not respected or treated fairly by her parents. There were subsequent, similar events that reinforced her incorrect beliefs about herself. She came to believe that others were out to get her, that she was a failure and that everything always goes wrong for her.

Did the blame game put parents and daughter into stalemate? You better believe it did.

You have heard that the TRUTH releases us. And you now know that blame holds us hostage. So, how do we bring light and love back into relationships like these? How do we stop the blame game?

First, with their daughter’s consent, I had a discussion with the parents. They couldn’t believe they had hurt their daughter and offered other ideas as to what had hurt her. I explained how I accessed their daughter’s subconscious mind and knew this to be the truth. Her mother started to cry when she realized this was the truth.

I then explained that they could raise another child, in the same way, and that child might not feel they had been disrespected or treated unfairly. I reinforced that this is how THIS child felt and we cannot deny HER feelings. I also explained that we all hurt our children in some way, sometimes without ever knowing it ☹.

When this mother realized I wasn’t judging her in anyway, she was very quickly able to accept responsibility. What she said next amazed me – she asked if it would help her daughter to share her feelings with her parents and release her pain in this way. No parent has ever asked me this; I have always been the one to suggest it!

I told this mother I needed a little more time to help her daughter release her incorrect beliefs about herself and increase her emotional strength. My plan was to ask her daughter the next week if she wanted to meet with her parents and myself to have this exact discussion. I commended her on suggesting this.

In our next session, I asked this young lady to describe what she knew of her parent’s upbringing. She saw the similarities to her own upbringing. I explained that we are to learn from our parents and that all suffering is learning ground. I asked her to explain the lessons she had learned from her parents, which she readily listed! Changing our perspective is how to stop the blame game.

We then had a discussion to help her understand her parents and simply “witness” their actions, so that she could stop taking things personally. She then started thinking about her parents differently and her mom later told me that her daughter seemed calmer in their presence.

Next, we had the meeting with all of us in attendance. A deep understanding of one another transpired. There were apologies, tears and their pain was released from the deepest parts of themselves. They hugged and left my office with more acceptance and love for one another than they had felt in years.

I then met with the young woman one more time to help her fully forgive, at subconscious level, her parents and herself, checking to ensure there were no remnants of blame or resentment.

The truth set this family free. This young woman, free of her pain, then started the process of parenting herself and began taking the steps to come to love who she was. Soon after, she began training for a new career with the plan of helping other youth, who suffer from addiction.

I see healing as a simple process. As long as individuals are not in so much pain that they cannot be open and vulnerable enough to do the work to heal, healing is possible. How to stop the blame game is something that can be learned by everyone.

Hi! I’m Meredith Deasley BA, RHN, RNCP, ACC and I have connected families to health and happiness since 2002. I help family members come to peace with one another and themselves. You can learn more about my services by checking out my website www.theresourcefulmother.com.