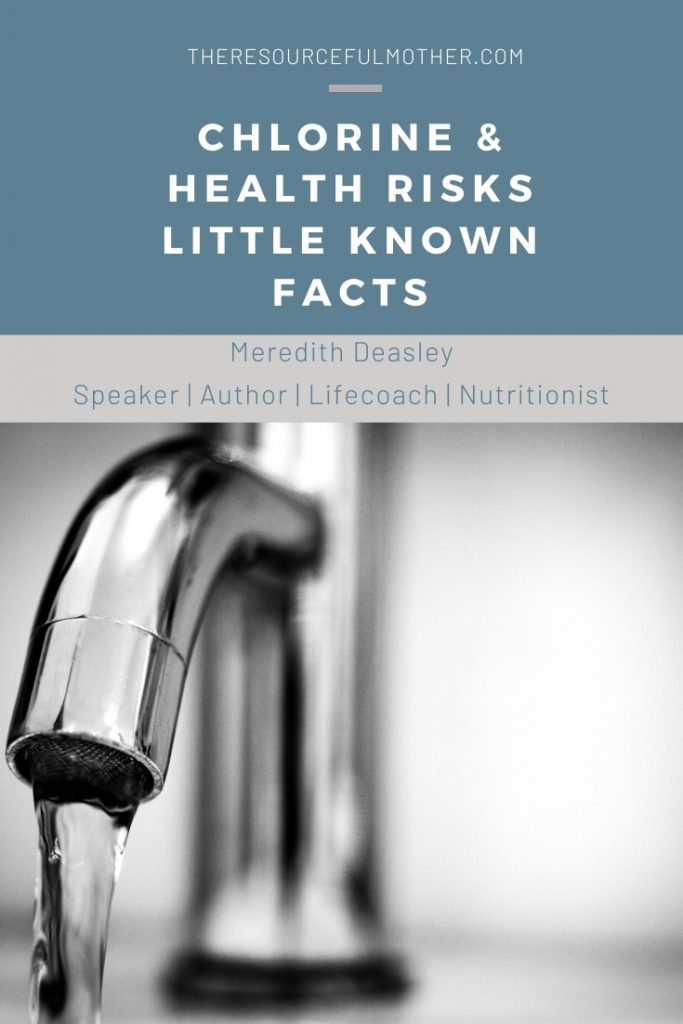 Chlorination of drinking water has all but eliminated waterborne diseases such as typhoid fever, cholera and dysentery in many parts of the world.  Proper chlorination kills the majority of bacteria, viruses and parasites responsible for these illnesses.  Unfortunately, there are several disinfection by-products (DBPs) from the chlorination of drinking water and other little known facts that are creating severe health risks.

I decided to write about these health risks at this time, because recently the Town of Newmarket wrote a letter to residents telling them that they would be increasing the amount of chlorine that they would be adding to the water supply; this also affects the water in neighbouring towns, such as Aurora.

Chlorine depletes the human body of good bacteria and therefore contributes to many symptoms and conditions such as constipation, skin disorders such as eczema, colds and infections, as well as bellicose behaviour in children.  But there are far more serious consequences.  Consumption of water with THMs (trihalomethanes, which are formed during chlorination) has possible links to central nervous system damage, miscarriages, stillbirths and various cancers.

According to a study in the January issue of American Journal of Epidemiology, drinking, bathing or swimming in chlorinated water may increase the risk of bladder cancer, Reuters Health reported.  The findings are the first to suggest that the chemicals can be harmful when they are inhaled or absorbed through the skin, as well as when ingested, Dr. Cristina M. Villanueva of the Municipal Institute of Medical Research in Barcelona, Spain and colleagues noted. Study participants who drank chlorinated water were at 35 percent greater risk of bladder cancer than those who didn’t, while use of swimming pools boosted bladder cancer risk by 57 percent. Those who took longer showers or baths and lived in municipalities with higher trihalomethane levels were also at increased cancer risk.

In Canada, at Dalhousie University in Nova Scotia, researchers found that high levels of trihalomethanes, a by-product of chlorine in drinking water, significantly increased the risk of stillbirth.

A Norwegian study of 141,000 births over a three-year period found a fourteen percent increased risk of birth defects in areas with chlorinated water. Scientists have already found an association between chlorine and an increased risk of bowel, kidney and bladder cancer, but it is the first time that a link has been verified with higher levels of spina bifida.

In a study published in the Annals of Allergy, Asthma & Immunology this month, researchers found that “High urine levels of dichlorophenols are associated with the presence of sensitization to foods in a US population.  Excessive use of dichlorophenols may contribute to the increasing incidence of food allergies in westernized societies.” Food allergies are very common in children with autism, ADHD, and related disorders, and have been significantly on the rise in the last decade. To read the article published by Julie Matthews of Nourishing Hope, please click here.

Aquarium fish will die within a matter of minutes if you add tap water to your fish tank without also adding a de-chlorinator to remove the chlorine. That should tell us something about the danger of drinking chlorine.

So we know chlorine is in our drinking water, our showers and baths, our swimming pools and hot tubs but where else is it being used? Sucralose, used in Splenda, gum and a host of other sweet edible substances contains chlorine!  Table salt contains chlorine.  Grains are bleached with chlorine to make them white!  Bleach used on our white clothing contains chlorine.  And all ice, unless made with filtered water, contains chlorine.  I always find it odd when I order bottled water in a restaurant and they ask me if I want ice with that.

Chlorine has an amazing ability to chemically bond effortlessly with other substances, which is one reason it is used so frequently in manufacturing.  During the last century, chlorine has been combined with many other “normally safe organic substances” to form some of the most powerful deadly toxins known to man, such as dioxin, DDT, PCBs, etc.  But a number of safer, non-toxic options are used in other parts of the world for cleaning up the water.

Certainly, reverse osmosis purification systems are excellent at removing all toxins from water.  The only trouble with them is that they also remove the minerals from the water.  As long as a good source is used to replenish those minerals, that is what I, along with many other nutritionists, are recommending to families wanting to do things differently.

If you are interested in learning more facts about our water and the various water purification systems, I recommend having a look at the number of articles found by clicking here.  This is the website for a local company, owned by Philip Glendenning, who has a wealth of knowledge and has been providing cost-effective water purification methods for families for almost two decades now. Philip can be reached at 905-830-0261.

Have you or your children suffered from the ill effects of chlorine?  If so, please share your stories with other readers. Don’t forget to leave a link back to your own blog too if you have one via the commentluv feature here on the site. And, if you love this blog, won’t you vote for us?  You’ll find the link in the sidebar to the right of this post. If you are reading this post via email, please click here to be taken to the website where you’ll find the vote box.