Learning to Surrender Regarding Your Child’s Health 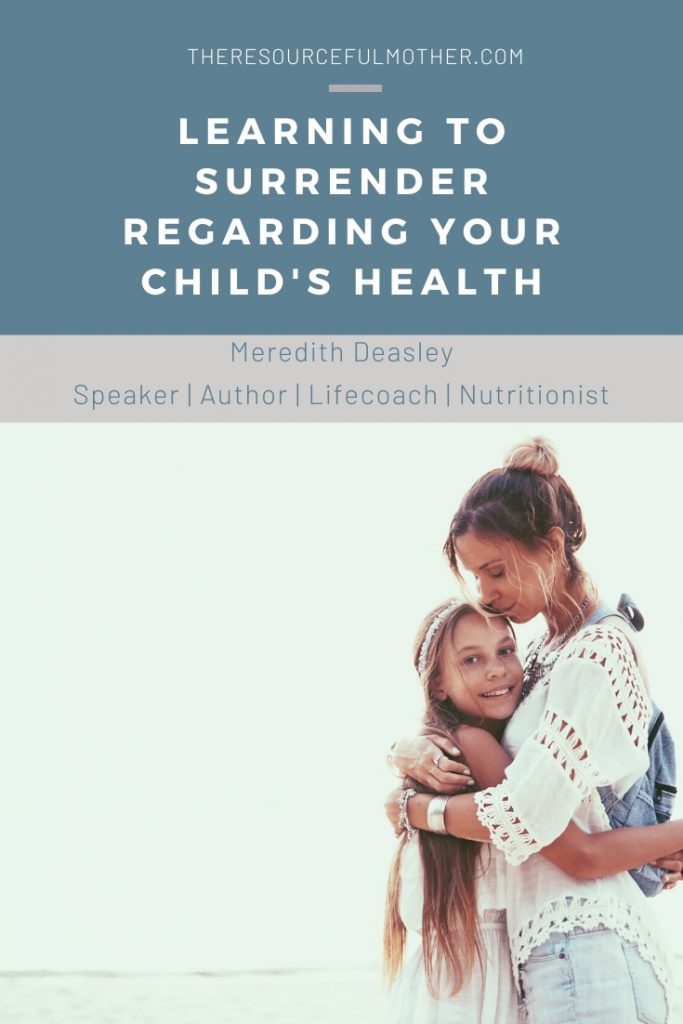 In the past few months, I have talked with a number of mothers who have been trying with all their might to put an end to their children’s health issues and suffering.  There are so many options once one learns about holistic health and its power.  So often, we want to see one practitioner, receive all of the answers we need and have our child be healed.  There is nothing wrong with that; it’s just unfortunate that it doesn’t seem to happen like that.  Instead, as each of us goes through life, we receive the pieces to our puzzles, at the time it seems we need them. And sometimes we simply need to learn to surrender.

Sometimes we do obtain the solutions we need but we are simply not ready to implement them.  One mother hears that her underweight child needs to go off of gluten, questions the logic of this recommendation and struggles to imagine how she would implement such a drastic change to her way of eating.  Months go by, her daughter continues to be diagnosed with “failure to thrive” and then the mother sees another expert who tells her that her daughter needs to go off gluten entirely.  This time, the mother is stronger, her baby is older, she has started getting some sleep again and her other children are slightly less dependent on her and she feels ready to take this step.  Her baby gradually gains weight and begins to exude health.

One mother tries everything she has learned of to help her son’s eczema yet his skin will not heal.  Finally, she learns that her stress could be the biggest culprit for her son’s skin challenges.  Suppressed resentment, mental eruptions, frustration over external events and a feeling of powerlessness to do anything about them are all emotional causes behind eczema.  Her son was taking his frustration at not being cared for in the way he needed, out on himself.  As soon as his mother started taking care of herself, she was better able to give her son the love he needed and his eczema went away within weeks.

One time, I was in Mexico with my children.  We had gone horseback riding on the beach and seen a huge sea turtle lying in the sand.  Once we got off the horses, my youngest, Paige, wanted to go back to where we had seen the sea turtle, to get a closer look.  I knew it was quite a distance away but I wanted to see it again too, so off we went.  We walked a great distance with eager Paige quite a ways in front of me.  After some time, I realized that Paige had gone past the area where we had seen the turtle.  By now, she was really far way from me and out of earshot.  I continued to follow her, not wanting to lose track of her.  I was getting tired and hot, knowing that we needed to get back for dinner but I continued walking.  It seemed as though Paige would walk forever on her quest.  I knew I had to do something differently in order to make her stop.  I decided to stop walking and stand in such a way that when she looked back, she would hopefully be able to see that I had stopped following her.  Sure enough, within a minute of “surrendering”, Paige looked back, saw me standing still and began running back to me.  I was so relieved to have her back at my side and to be returning, together, to our resort – I can’t begin to tell you!  And I knew that if only I had surrendered sooner, I could have had her back in my arms so much earlier.

So it seems as though the answers come to us when we give ourselves a break from all the craziness and surrender to things not being the way we want them to be.  This is why so many are meditating.  We are so reluctant to wrench ourselves away from the battle but when we even take 5 minutes to just be, the solutions we are so desperate to obtain often come to us and our paths become clear.

What battles are you fighting?  What never-ending quest are you on?  It may seem as though you could never just ‘let it be’ and you shudder at the idea of just “giving up.”  You might be thinking. ‘If I did that, it would seem as though I don’t care’ or ‘People would surely think I am a failure if I just gave up’.

I encourage you to try it.  The answers do come when we stop to listen.  And they are usually far simpler than we could ever imagine.  Sometimes we make life more difficult than need be.  I know because I have been there.

I don’t hear from many of you when I write these blog posts.  This is such an important concept and it would mean so much to all of the readers and literally change lives, if you would take a few minutes to share your story of surrendering with all of us.  Feel free to leave a link back to your own blog via the commentluv feature here on the site.

I thank you in advance for your contribution to helping those exhausted, wonderful parents out there to understand that there is hope for their children.