Teaching Your Child to be the Master of Their Thoughts 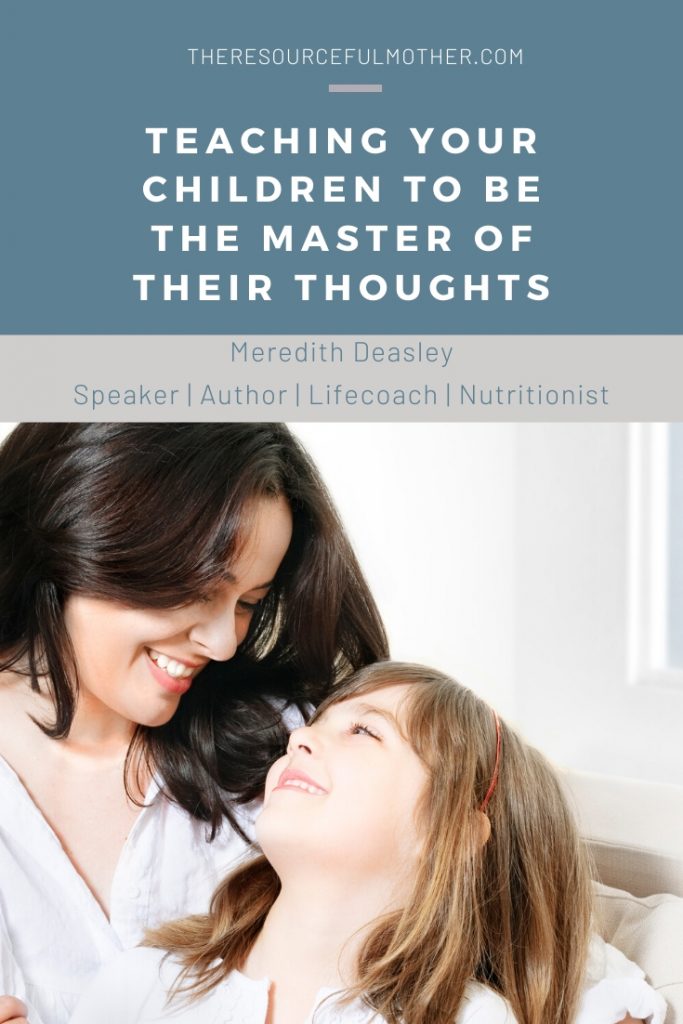 If we hold a thought long enough and repeat it often enough, that thought becomes a belief.  Many of the thoughts or beliefs that guide us are not even true; they are illusions of the mind.  Our beliefs and belief patterns get started in our childhoods, when our perspective is extremely limited, to say the least.  One incorrect perception can lead to another until our beliefs are completely off base.  Incorrect beliefs include: Life is too hard.  No one can be trusted.  I am not good enough. When we desire to improve the way we feel or certain aspects of our lives, we need to become the master of our thoughts.  Every undesirable thought and belief can be converted into a desirable one.  And there is always one viewpoint in any situation that brings us true peace.  When we find that new viewpoint, our confidence is restored and we can move forward to a whole new level of success.

I would like to like share an example of how my daughter, Paige, mastered her thoughts.  Paige is 11 years old and she just played baseball for the fourth year in a row, with her Dad as her coach.  She was the only girl on the team and one of the few girls in the league.  I could count on one hand the number of games her team had lost in the four years.  It was the final inning of the final weekend tournament game.  Paige decided to try to steal third base.  The player on the opposing team tried to tag her but was unsuccessful.  He knew he had been so close in achieving his goal that he announced that she was out.  The umpire supported the call that she was out.  The whole game ended and her team had lost by 5 runs.

I saw Paige’s face.  I saw her tears fall as she walked off the field.  I felt her utter disappointment in the unfairness of it all. I felt her question her skill and her ability to discern what was fair and what was not.  Once she was back at the bench, my eyes lent her my support.  I watched as her Dad awarded each team member their trophies for being the league champions, reminding the kids that this was simply an end of season tournament.  I watched Paige interact with the boys on her team and start to goof around and make jokes.  I watched her as she ate her watermelon.

Within half an hour or so, I was astonished to see that Paige was fine; she was just fine.  On our way home, I asked her what she had done to turn her feelings around from pure devastation and sadness to feelings of contentment.   She thought about her response and then she said “I remembered how well I had played all game and all season and felt proud of the job I had done.”  That’s it.  She could have taken her negative feelings about what happened and turned them into a belief that she wasn’t a good ball player – that she should have made it to third base faster; that the world was not fair.  But no, this girl’s self-esteem was healthy.  This girl wasn’t going to let circumstances change who she was.  This girl perfectly demonstrated how to turn negative feelings into positive thought patterns and feel peace within.

Ironically, right after we had this discussion, we walked past a girl in a soccer uniform, crying; she was far away from the soccer field.  I looked at Paige and said “I guess she just needs a new way to look at things.”  Paige responded happily by saying “Yup!”

“All that you achieve and all that you fail to achieve is the direct result of your own thoughts.” James Allen As a Man Thinketh

I welcome your feedback. Please feel free to leave a link back to your own blog too if you have one, via the commentluv feature here on the site.