Dairy – a food we CAN live without 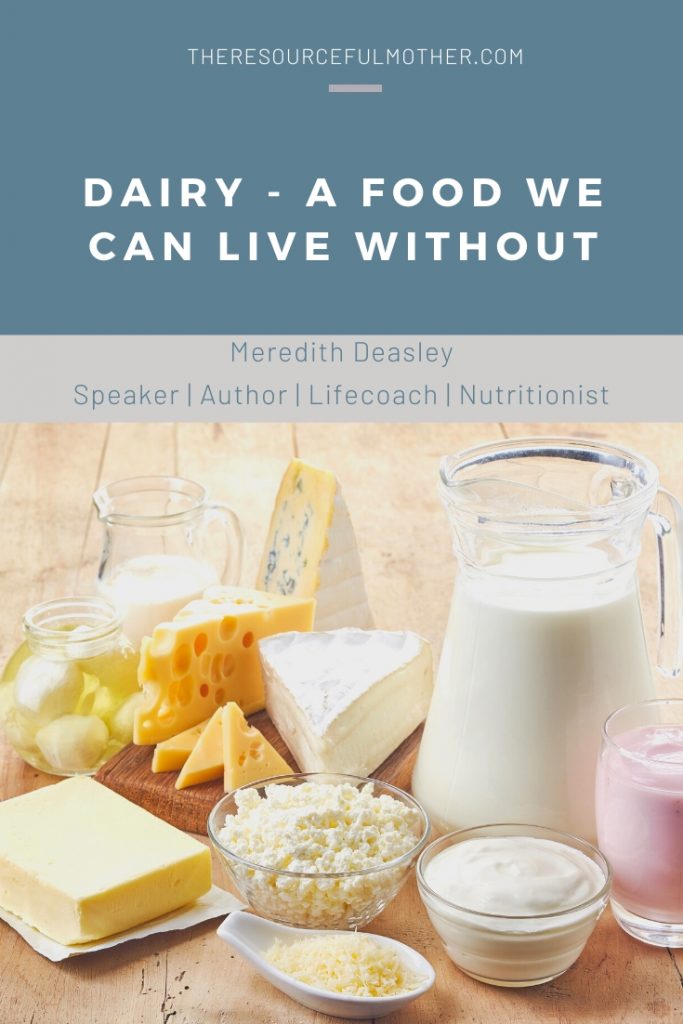 Many of you hear me refrain from extolling the virtues of dairy and you may be wondering why.  We have always been told to drink our milk and the fear of God is put into us from a young age that without dairy, we cannot get our calcium.   Why are we not concerned about getting enough zinc or magnesium?  We should all learn from the marketing campaign of the dairy farmers and the stores who sell their milk!

Cow’s milk is the number one food causing symptoms, conditions and disease in North American children, as well as adults.  This is because the majority of people’s bodies are incapable of breaking down many of the proteins found in today’s pasteurized cow’s milk.  Until the 1950’s, you could buy unpasteurized (uncooked) cow’s milk that contained 22 enzymes, making digestion of cow’s milk a lot easier.  Modern milk is pasteurized in order to create longer shelf life by destroying harmful bacteria.  Pasteurization also destroys friendly bacteria, enzymes, vitamins and minerals.  Milk loses 50% of its available calcium, for example, during pasteurization.  Homogenization of milk makes the fat in milk nearly indigestible.  Low fat and skim milk make calcium unavailable because fat is needed for the proper transportation and absorption of calcium.  Most nutritional experts agree that unpasteurized, unhomogenized, raw dairy products are far healthier than what is generally available for purchase today.  So, it is what man does to milk that makes it so reactive to so many!

Cow’s milk contains at least 25 different proteins that may induce reactions in humans.  There are three main proteins in whole milk: casein, whey, and lactalbumin.  These milk proteins are found in all animal milks but in varying amounts.  Most people have a hard time digesting one, if not all of these parts.

Cow’s milk also contains lactose, which seems to be the component in cow’s milk that is discussed the most.  Lactose is the enzyme we need to digest the milk sugar (lactase) found in breast milk, cow, sheep and goat’s milk.   Lactose intolerance involves an inability of the body to produce lactase.  Symptoms of lactose intolerance include bloating, cramps, sharp pains, burning in stomach, nausea, diarrhea, constipation, dark circles under the eyes, achy joints, eczema, ear infections and bedwetting.  Skimmed milk has the highest amount of lactose and whole milk has the least.  Goat and sheep milks have the lactose enzyme yet are more easily digested.  Cream and butter have hardly any lactose.  The lactose in good quality yogurts purchased at health food stores have been mostly pre-digested by the good bacteria, so some children can handle yogurt but not other forms of dairy.  Make sure that you buy the plain yogurt with no sugar or chemicals added and that the label says “active (or) living yogurt cultures”.  Yogurt that you can purchase at a regular grocery store is not properly fermented therefore the lactose is not broken down which then impedes digestion.

The most common protein found in cow’s milk is casein.Casein is not water-soluble and therefore, is hard to break down.  Casein is a tough protein substance so strong and sticky that it is often used to make bookbinding glue and postal paste.  Imagine what this stuff does to your bowels?  Casein’s molecular structure is nearly identical to that of gluten, found in wheat, which many react to as well.  Here’s the shocking piece of information. Casein is an ingredient used in all cheese substitutes!  If you react to dairy and you decide to try the alternatives such as rice, soy or vegetable cheese and find that you are still reacting, it is because of the casein!  Casein is a huge concern and simply has not been given the press that lactose has.

Other challenges with cow’s milk

Although cow’s milk is high in calcium, it is so difficult to digest that we really cannot consider it to be a good calcium source.  It is also high in phosphorus, which binds to calcium, making it unabsorbable.  The calcium is then lost in the urine.  To prove that the calcium in milk is not being well digested, I invite you to consider this fact.  In North America, we are the largest consumers of cow’s milk and animal products.  We also have the highest rate of osteoporosis in the world.

Cow’s milk is also deficient in vitamins B1, C, E, and A.  It prevents iron absorption.  Given the ratio of calcium to magnesium, frequent milk drinkers can develop a magnesium deficiency.  This deficiency causes children to have trouble sleeping, become constipated, irritable or anxious, and suffer muscle cramps, spasms or an irregular heartbeat.

Cow’s milk is also mucus producing, causing mucus to build up in the body.  Children that are full of mucus have recurring stuffy or runny noses, coughs, colds and flu, headaches, and ear and throat infections.  This is also due to the improper ratio of calcium to magnesium in cow’s milk.

As if that is not enough, cow’s milk contains residues of growth hormones, used to ensure that cows produce five to six times more milk than untreated cows.  “The Tao of Detox” states “…and in growing children these bovine growth factors can cause abnormal development, causing excessively rapid growth of tissues.  Synthetic bovine hormones in commercial dairy milk, for example, have been indicated as a major factor in premature puberty in young girls.”  Girls as young as eight or nine are experiencing full breast development, sexual fertility, and pregnancy.

Dairy by another name

Butter – Coconut oil (similar consistency to butter and doesn’t taste like coconut), olive oil or flax oil (cannot heat flax oil).  Butter is mostly milk fat and can often be tolerated by children who react to milk.  Ghee, also known as clarified butter, is made by skimming off all the white protein particles (milk residue) from melted butter to produce a pure, clear “butter oil”.  This oil may be used for cooking at high heat without scorching the oil and producing free radicals.

Cream – Coconut milk can be used instead of cream.

Yogurt made from cow’s milk – Sheep, goat or soy yogurt.  Kefir yogurt is the healthiest form of yogurt you can buy because the lactose has been broken down by the fermentation process; it also contains a high concentration of live good bacteria.  Unfortunately, it is not well liked by most children!  Fermented foods are generally high in enzyme and good bacteria content, which is one reason that they are easy to digest.

Cheese – The older and sharper the cheese, the more broken down the lactose and the better tolerated it is.  There is also goat cheese (even mozzarella and cheddar) and sheep cheese that are well liked and are better digested than cow’s milk cheese.  If your child is sensitive to casein, almost all alternative cheeses (i.e. soy, goat, sheep and vegetarian cheese slices etc) contain casein.  Many people with a dairy sensitivity can consume goat and sheep products without difficulty.   However, both are still mucus forming.  Remember: pizza does not need cheese as an ingredient!

So you’ve read all this and you maybe wondering…does Meredith and her family stay away from dairy completely?  How do they eat at parties?  How do her girls partake in the lovely pizza eating custom that is so prevalent in today’s society?  We do not live in bubble; we do eat dairy.  We eat it on some of our “treat days”, which take place once a week.  And in the ten years that I have been helping others with their health, removing dairy has had the most significant impact on their well-being.  Don’t take my word for it, look into this further.  There is a whole other way, if we dare to be different!